How to avoid the next Brexit

Health Warning: this blog is about to get political. Reading this post requires you to endorse two statements which I will not address with evidence, but instead take as a priori assumptions.

It has been a week since the public voted in the UK referendum on membership of the EU, and six days since we learnt of what was, for many, a terrifying result. This has been a week of political turmoil and economic crisis. Many of us have felt helpless in the face of the national and international repercussions of the so-called Brexit win. However I would argue that the academic community is not helpless in this situation – in fact that we played a causal role in this. And here’s why.

Maps like this one starkly illustrate the pattern of voting across the UK. For anyone unfamiliar with UK geography, this shows that voting to remain in the UK was concentrated in the major urban centres, Northern Ireland and (as a resident of this great country, I am proud to say) in Scotland.* Newspapers have reported on analysis showing that the best single predictor of voting was whether or not voters had a graduate degree. Thus this map can be interpreted as a geographical representation of the social, and specifically educational, inequalities in our country.

Some, including this piece in the Times Higher Education supplement, have responded to this evidence with statements such as the following:

Universities "must fight back against the anti-intellectualism & distrust of experts that marked #Brexit campaign" https://t.co/k69S7ZLs64

This is ALL WRONG. This attitude, pitching the intellectual elite against those with less educational advantage in a battle, is what got us into this mess in the first place. Generations of experts – a major portion of these being members of the academic community – have talked down to their publics, issuing diktats which are doubtless both well meant and grounded in solid evidence, but which fail to resonate with the recipient. The result is that experts have become “so-called experts” and suspicion of intellectual opinion is rife. We can see this phenomenon in some reactions to evidence on climate change, or beliefs about (spurious) links between vaccines and autism. Rejection of expertise in the political sphere may explain the grassroots popularity of Donald Trump, Nigel Farage and even (dare I say it) Jeremy Corbyn.

One of the major barriers to effective engagement with communities is the notion that expertise requires formal educational qualifications, empirical evidence, and fancy language (like “empirical” ^). This is nonsense. Expertise can also be grounded in personal experience. Even if we, as professional researchers, think that gathering systematic evidence is a better basis for decision-making (which I do – why else would I be in this business after all?) we must acknowledge that many (most?) people in our society derive their knowledge from personal experience or discussions with pals. In addition, information gathered in this way gives rise to personal beliefs which are loaded with emotional content. A failure to recognise this, to be respectful of this kind of expertise, and to incorporate it into research-based recommendations will inevitably lead to division. As an illustration, imagine a childcare professional came uninvited into your home and told you that, based on the empirical evidence, you were responding to your kids the wrong way, giving them the wrong toys, sending them to the wrong school. What would you think? “They’re my kids. Go away.” §  Yet this is what the academic community are doing all the time, when they send out messages, however well-meant, without proper engagement.

Another example of this phenomenon that is ironic to say the least, was the fact that those voting to remain in the EU were so convinced that they would carry the vote. Since the referendum result was announced, I have taken part in numerous conversations in which we have discussed the problem of being caught in a bubble – reading our favourite newspapers, talking to like-minded friends, and posting in the echo-chamber of social media – which falsely led us to rely on our own experience (“everyone I know is voting to remain”) instead of the evidence (“polling shows the leave camp out in front”). I heard the voices of expert political commentators and I discounted them, based only on flimsy, but deeply-held beliefs derived from my personal interactions.

Recognising the expertise of others, derived from personal sources, is a first step. But we also need to overcome the sense that we (the “experts) and they (the “public”) are on opposite sides. This means ensuring that the work we do is clearly grounded in the priorities of the relevant community, that it draws on their expertise, and that it delivers results of meaning to those individuals. One major failure by the experts prophesying economic meltdown in the event of a vote to leave the EU (prophesies which have been upheld) is that they rarely demonstrated that the economic modelling on which they base those opinions is grounded in a desire for people in the UK to: stay in work; have job security; earn good wages; have plenty of cash to spend in our shops and on our services. Instead messages about the UK economy become aligned with the pay packages of bank CEOs, or rarefied messages about GDP and national debt. How can individuals be expected to get behind such arguments which bear no relation to their lived experience? 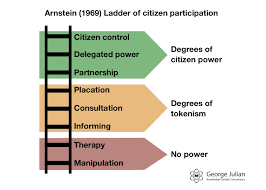 Eliminating this problem requires that we align ourselves not just so we’re pointing in the same direction (we both want the same thing) but also on the same level. This ladder of participation illustrates one way to achieve that, by showing the different types of engagement with community representatives which are possible. Partnership is the quickest way to get into the top tier (delegated power and citizen control may mean generational shifts which are harder to effect for the individual academic). Building functioning and meaningful collaborative relationships has multiple benefits for both parties. They can ensure that the research asks the right people the right questions, using the right language, and the results go back into these communities using useful channels of communication. If more academics recognised that their current engagement strategies were low on this ladder, and worked harder to rise up the rungs, I believe that the consequence would be a rise in community knowledge and respect for / endorsement of expert opinion.

Working with influential community figures can be a great way to achieve this – people who can speak loudly in their community about the way in which they have been involved in research. After all, how often have we heard people say “well, they didn’t ask me or anyone I know” about a study which is supposed to say something about their community? In fact, a scientist colleague said exactly this just the other day, joking about pre-referendum opinion polls. If we in the scientific community make this mistake (they didn’t ask me = the poll is not valid) how can we expect others not to do the same?

In my experience (there we go again… see how often we base our opinions on this form of expertise?) when academics think about public engagement they normally think about the message of their research. For example, I might focus on explaining to parents of children with autism what my research can tell them about using technology to support their child. However there is another, more profound reason to engage with members of the public, and that is to expose the very machinery of research. If we can communication the purpose and process of research we will achieve so much more than mere dissemination of a message.

I frequently find myself in academic talks or reading papers which cover topics well beyond the limits of my expertise, but I have faith in them because I have faith in the scientific research process. I can understand the notion of an experiment, and the fundamental principles which guide it. I can identify when these basics have been violated. I know (roughly) how much weight to attribute to a single finding and I can tell when findings are very new and vulnerable, versus robust and established. In the former case, I have faith (despite the well-publicised lack of direct replications) that the scientific community will work to test and extrapolate from a new hypothesis, giving rise to a body of evidence which can be trusted to inform policy and practice.

If we can give society at large confidence in and knowledge about research processes, this will achieve so much more than mere delivery of specific advice can ever manage.

Good public engagement is hard. Get someone who knows what they’re doing to help you.If you’re in Scotland (lucky you!) try the Beltane Network.

Do it now. Do it properly. Do it well. This could be the way to avoid another Brexit.

* I think this can be interpreted as a concrete result of the progressive social policies in Scotland which have served to minimise social inequality in the region relative to the rest of the UK. But that is an argument for another time…

^ NB: this blog is not a good example of the kind of public engagement I am talking about here. It uses jargon and will be shared, doubtless, mostly among people who share my educational background (e.g. having an undergraduate degree). But that’s OK because the people I want to reach in this case are those educated people, the “experts”.

§ In fact you might use slightly stronger language than this. I would, anyway.